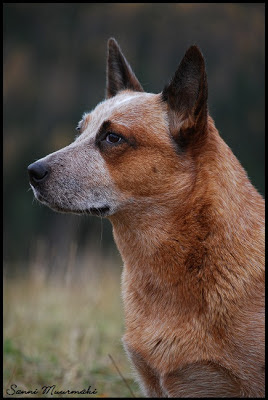 Malla is the daughter of my first Australian Cattle Dog, Miina. Out of 8 siblings Malla stood out with her temperament. She was an active, self-confident pup. And she has grown to an active, self-confident (almost TOO self-confident) adult. Mallas temperament is very typical for an ACD, she stands on her own two feet, I can't remember anything, ever, she had feared, she is open and friendly towards people, but usually doesn't pay much attention to them. She is quick to learn, quick to react, and easy to train. But due to her strong character and reactions, she isn't and easy dog. At first I had quite a hard time handling her, since she didn't seem to need me at all.


We have done so many dog sports with Malla, from missing persons -search to canine freestyle. Our main intrests were agility and obedience but due to knee injuri she is retired from active agility training. So now we have started at the winner class in obedience. Malla is fun dog to train with and her motivation is very good, she enjoys tug-of-war and treats and is eager to work.

Malla hasn't been the most fortunate dog when it comes to health, she broke her back at the age of 5 months after she fall from steep stairs and hurt her back ("I can RUN those stairs even I have never been permitted to walk them..."). She is deaf in her right ear, which was discovered at the age of two when we finally got her to BAER. She has slight changes in her elbows. In 2010 she hurt her left knee and got a rupture in the ligament, and at 2011 she was operated with TTA-technique. Healing progress went very well, but at 2012 we got a set-back when she hurt the operated knee.

This fierce  and mentally strong red girl has taught me so much, and I love her temperament, even though it isn't doesn't make her very easy to handle at time to time.  Nowadays we are a team, and work well together.

In 2014 Malla got a rupture in the right knee as well and I let my girl go with a heavy heart. 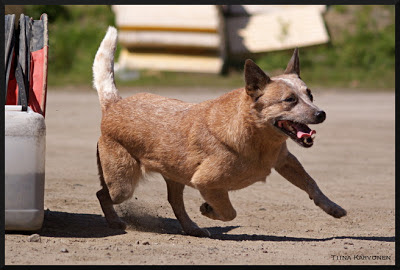